STARK Group was awarded winner of this year's electric car workplace in Frederiksberg, Denmark. It is the first time that the prize, which aims to support the green transition, has been awarded. Dansk e-Mobilitet, who presented the award, hopes to inspire companies to set up charging stations for use by both employees and locals in the area. 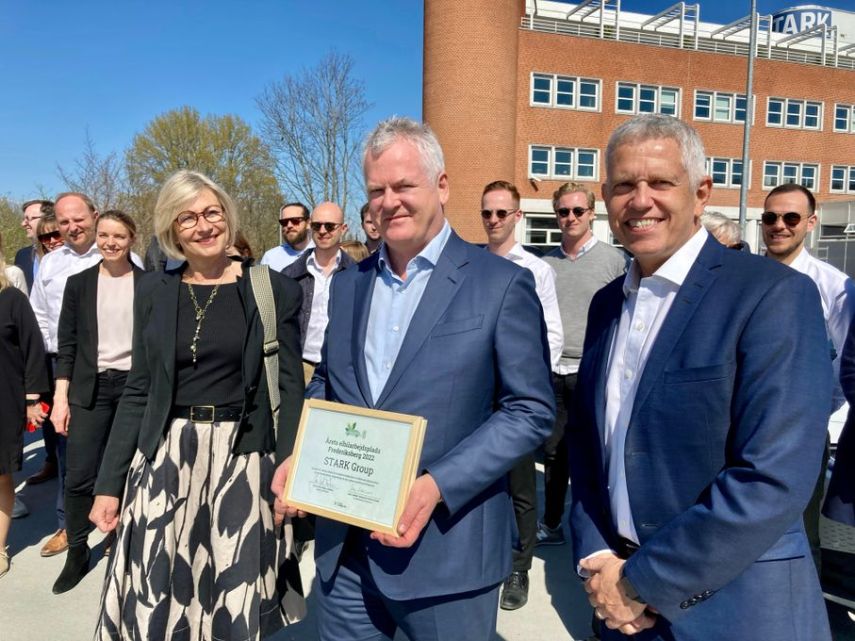 In STARK Group, CEO Søren P. Olesen is pleased with the recognition.

“We want to make it easier for our employees to replace the petrol or diesel car with an electric car. We do this by removing one of the biggest obstacles: the lack of charging stations. We have installed 30 charging stations at our headquarters so our employees can securely convert to an electric car for the benefit of the green transition, and so we ensure optimal utilization of plug-in hybrid cars that often have a shorter driving range on battery, ” says Søren P. Olesen and explains that the company's climate plan is one of the industry's most ambitious.

We want to contribute to the green transition. In recent years, we have intensified our sustainability efforts to reduce our CO2 emissions by 42% in 2030 and achieve net zero in 2050. To reach our targets, multiple initiatives have been initiated: most of our forklift trucks are electric, in the urban areas, an increasing amount of our trucks are electric or run on fossil-free HVO-diesel, and in Copenhagen, we deliver light building materials with cargo bikes. Charging stands for our employees' cars are another initiative in the series, and it will not be the last,” emphasizes Søren P. Olesen.

Frederiksberg Municipality and Dansk e-Mobilitet, presented the award, where STARK Group became the supreme winner of the title of the electric car workplace of the year in Frederiksberg.

“A very big and well-deserved congratulations to STARK Group, which with its far-sighted investment in charging stations is leading the way and makes it easier for employees to switch to electric cars and thus emit less CO2. You are a role model and an example to follow for other companies in Frederiksberg,” says 1st Deputy Mayor Lone Loklindt, who is chairman of Frederiksberg Municipality's Business Council, which, together with Dansk e-Mobilitet has nominated the winner.

"In Dansk e-Mobilitet, it is our most important task to speed up the transition to green electric cars, and it is a pleasure to award the prize to STARK Group, which has to that extent taken the lead in setting up charging stations in its own parking spaces," says director John Dyrby Paulsen, Dansk e-Mobility.

STARK Group's overall climate plan was validated and approved earlier this year by the independent international climate partnership, the Science Based Targets initiative. The climate plan contains a 42% reduction in CO2 emissions from own operations (scope 1 and 2) by 2030, as well as a plan to actively procure 100% renewable electricity and reduce the total scope 3 emissions by 12% within the same time frame. Furthermore, STARK Group is committed to achieving net zero by 2050.

STARK Group is a leading business-to-business distributor of heavy building materials for the construction industry in the Nordics and Germany, with a strategic focus on serving the professional builders. STARK Group has a revenue of approx. EUR 5 billion and serves c. 10,000 suppliers and 260,000 customers from its +485 locations. Headquartered in Denmark, STARK Group has approx. 11,700 employees in Germany, Denmark, Sweden, Finland, and Norway. The Group has doubled in size over the last couple of years through acquisitions and organic growth, and today, it holds a leading national or regional position in all markets.